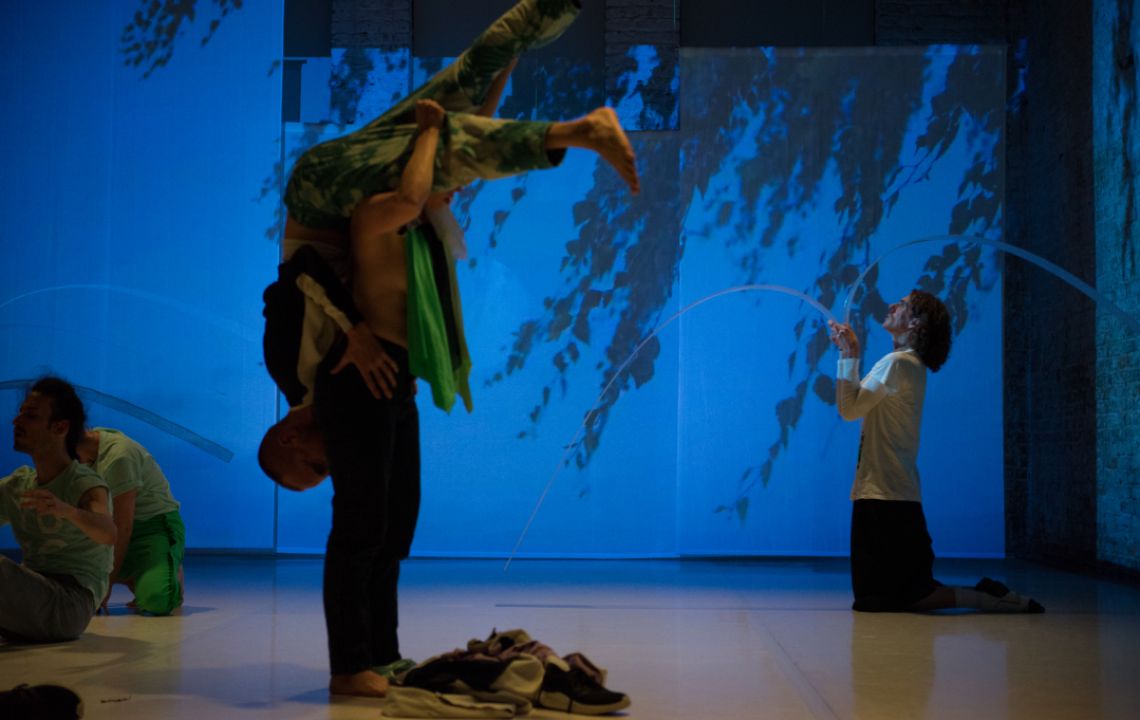 Terrestrial Transit/ Letter to the Audience

This is not the end of this journey. But let us start from the beginning – even though we are not sure where to start and what to begin with: With Peter and Eszter’s duo that they shared in 1992 at the EDDC in Arnhem? Or from the first meeting in Studio Burdąg in Masuria to work on the long-term Polish-German performance project Moving the Mirror in 2016? With Peter, Eszter, and Michiel traveling to Susch in January 2022 in the Swiss Engadin to start conceptualizing what this journey might be about? Is it about the notion of protest and activist practices in the light of the strengthening of right-wing authoritarian politics and against the backdrop of political protests, especially in Hungary and Poland that some of our ensemble members were involved in? Is it about the critical and even anarchical potential of improvisational practices and alternative modes of participation and collaboration in times of crisis? About modes of storytelling as a tool for shaping the world that embrace our personal and yet very political experiences? Or did this project arise more generally out of a collective yearning that built up during the last years when one disaster followed the next, accumulating into a constant mode of crisis? And out of Peter’s wish to form a transient a/company that would give agency and belonging to its members within our precarious realities? Let’s start there. But not as a feeling of resignation but as an embrace of – as Rebecca Solnit would say – hope and the question – quoting Ann Cooper Albright – how to land.

The actual journey started in May 2022 with a gathering at DOCK11/Eden****, which was concluded by already opening the working process after two weeks to the public at Sophiensæle. We continued with another two weeks at Ponderosa, leaving the representational theater space in favor of the Polish-German border landscape, sharing time with wind, the water of the Oder river, and the wideness of the meadows, followed by spending time with the local theater and art community in Szczecin – eventually traveling to the open Polish Baltic Sea. Every phase of the journey was accompanied by a different constellation drawn from the – in total – 20 Cranky members, and supported by various old and new friends, as well as spontaneous encounters who have to be mentioned here (in a totally random order and surely there are many more to add): Eva Karczag, Victoria Martínez, Juliane Längin, Boglárka Börcsök, Stephanie Maher, Annika Stadler, the Stolper Loch, Bartek Mikuła, Darek Mikuła, Marta Poniatowska, Teatr Kana, it’s gardener Janek, Katarzyna Sitarz and her family, Miłosz Jon, Aleksandr* Demianiuk, Andrzej Witczak, TRAFO Center for Contemporary Art and Muzeum Susch.

Choosing to consistently work with a very open scoring technique – that is, Nancy Stark Smith’s Underscore, an improvisational tool to integrate Contact Improvisation into a wider field of improvisational dance practice – gave the whole project a frame that was both very open – because of the simplicity of the score’s structure – and yet confined as this scoring technique was consistently practiced during all stages of the journey, and is practiced also here tonight.

Terrestrial Transit did not turn out to be a linear journey with a safe trajectory but rather an accumulation of stories collected in a slow and meandering process of spending time and dancing together: joining the queer parade in Szczecin with mixed feelings of both empowerment and of feeling unsafe; a collective walk to the Oder river during sunrise that turned out to be an anticipatory protest against the catastrophic mass fish die-off in the Oder just a month later; the protests against the newly implemented tax law in Hungary many artists – including Eszter in relation to this project – are negatively affected by; the tiredness that accumulates when you are working and living together at the same time and trying to balance out needs and fears of individuals: the reference to the Hungarian fashion maker Tamás Király appearing in Michiel’s windbags; performing in the outdoor area of Teatr Kana in Szczecin together with Bartek and Katarzyna – and many more from the audience that so freely engaged in dancing and composing together. It is all those stories and herstories that informed and still are informing this ongoing transit.
This text is proposing the perspective of a we – being aware that it is also the ambivalences and differences within this we that was and is part of this research.

Thank you for being here with us today.

Yours
Jette and Cranky Bodies a/company

A production by Cranky Bodies a/company in coproduction with DOCKART.
Funded by the Hauptstadtkulturfonds with the support of SOPHIENSÆLE and Muzeum Susch and by Fonds Darstellende Künste with funds from the Federal Government Commissioner for Culture and Media within the program NEUSTART KULTUR.

Many thanks to Ponderosa, Teatr Kana (Szczecin) and TRAFO Center for Contemporary Art (Szczecin).