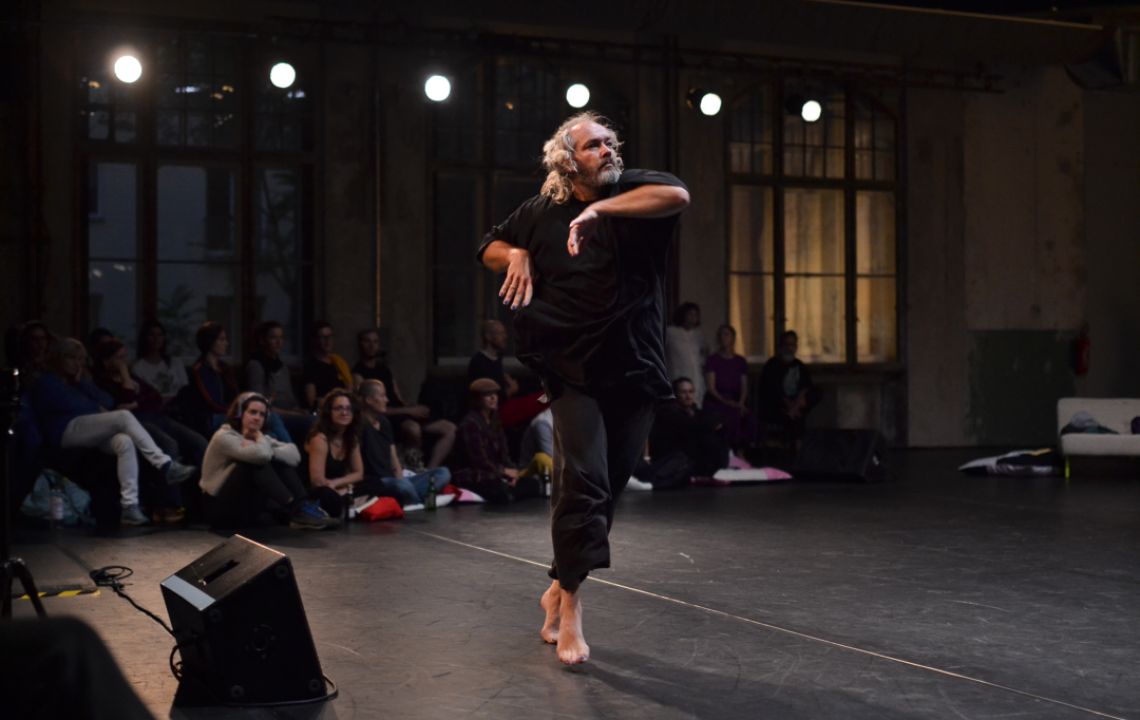 I came to Berlin in December 2000, for three reasons:
1. I wanted to share my choreographic practice with colleagues in the field that was growing in Berlin,
2. I  had heard that Stephanie Maher and Jess Curtis had recently moved to Berlin and were working in a new space, Dock11, and
3. I had just seen Sasha Waltz´s Körper in Stadtschouwburg in Amsterdam, and all the memories of our shared history—studying at SNDO and EDDC in Holland and our time as performers for Yoshiko Chuma in New York and Mark Tompkins in Paris—came back to my mind.

Sasha had just become part of the team of Schaubühne Berlin. There was one ballet ensemble at the Staatsoper Berlin, one at the Deutsche Oper and a third at the Komische Oper; there was the company of Kresnik at the Volksbühne, and there were Tanzfabrik Berlin and Dock11 with a lot of activities around dance, choreography, and theory of dance – not bad for a city the size of Berlin, I thought.

But it took me a while to find my artistic home in Berlin, finally locating the most interesting work and the most cutting edge choreographers in the very “alternative” studio, the new k77 at a squat in Kastanienallee that Stephanie Maher and Howard Katz Fireheart had just built, and out of which the countryside hotspot for contemporary dance, Ponderosa in Stolzenhagen, developed.
In the years that followed, I witnessed the rise of the conceptual dance artists in Berlin and delighted in the works of Xavier le Roy, Thomas Lehmen, and Tino Sehgal. but there was also a decline in the state-funded dance in Berlin.

In the 13 years since I came to Berlin Kresnik’s company folded at Volksbühne, which made space for a collaboration with the Brussels-based company Damaged Goods directed by Meg Stuart. This collaboration also ended after some years.
The company of Blanca Li at Komische Oper stopped its work, and the Opera Ballets from Deutsche Oper and Staatsoper merged into the Staatsballett. The city lost around 100 paid dancer positions. Recently the city-senate failed to honor the work Sasha Waltz has done in the past 20 years for dance in Berlin and Germany by providing a stable and secure environment for her to produce and perform her internationally acclaimed pieces. After finding and establishing Sophiensæle, and taking a leading role at the Schaubühne and the development of Radialsystem, she finds herself competing in the extremely underfunded independent dance and theater scene of Berlin, where all the young and old choreographers who came and still come to make Berlin their home are vying for funding to make dances that matter.


Since 2008 the city has gained new education programs for dance: MA programs at the FU, at UdK, and HfS Ernst Busch, and a BA in dance and choreography at the HZT. These come along with great hope for change; maybe in the next years, we will see the flowering of the seeds we have planted.